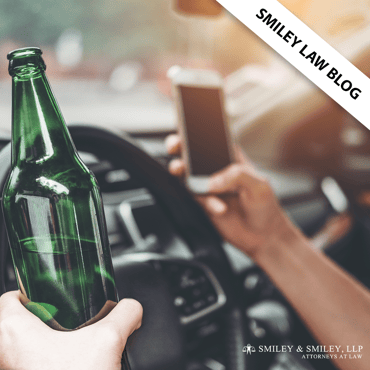 Accidents involving alcohol can lead to severe life-changing injuries or even death. Even though it seems like an open and shut case for financial compensation, it's not always clear who is responsible for those injuries. The Expert Legal Team at Smiley and Smiley will ensure the best possible outcome and ensure your rights are protected. Click to learn more about your legal rights.

According to the CDC,  alcohol use has been a factor in over a quarter of all fatal car crashes. Considering that this number only accounts for fatalities, the amount of people affected by impaired drivers is much higher. Allowing someone to drive while their judgment is impaired creates a dangerous environment for everyone on the road.

In the United States and its territories it is illegal to drive while drunk. Legally, "drunk" is classified by the National Highway Traffic Safety Administration as having a blood alcohol level of .08 grams per deciliter. Utah is one state that has an even lower tolerance, setting the limit at .05 grams. Despite legislation to keep drunk drivers off the roads, people still drive while under the influence of mind and judgment altering substances.

How much more likely is someone driving under the influence to cause a crash? A person with a blood alcohol level close to the legal limit is six times more likely to die in a car crash than an unimpaired driver. That risk is transferred to all the vehicles on the road.

Victims of crashes that involve drunk driving have legal recourse. Victims' rights vary by state law. In some states, victims of DUI crashes have a limited time to file personal injury claims. Support is crucial for those affected by drunk driving. Victims have the right to be compensated for injuries sustained in the accident and financial or other losses that occurred because of the crash.

Victims have the right to be present at court proceedings. It is your right to make a victim impact statement and to apply for Crime Victim Compensation. The attorneys at Smiley & Smiley defend victims' rights so victims of crime can focus on healing. Contact us if you have been injured in an accident caused by drunk driving.